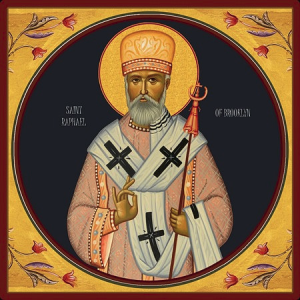 Our Father among the Saints, RAPHAEL (Hawaweeny), Bishop of Brooklyn, was the first Orthodox Christian bishop consecrated on American soil. Traveling throughout the continent in the first years of the 20th century, he founded thirty parishes in North America, including St. George in Charleston, West Virginia. His feast day is celebrated in the Antiochian Archdiocese on the first Saturday of November.

St. Raphael, a man of angelic name and apostolic fervor, was influenced by many cultures. He was born and raised in the Middle East, educated by Greeks at Halki, and by Russians at Kiev, and he spent the last nineteen years of his life as a missionary in North America. He said of himself: “I am an Arab by birth, a Greek by primary education, an American by residence, a Russian at heart, and a Slav in soul.”

The holy bishop was probably born on or about November 8, 1860. Fleeing Damascus due to religious persecutions, Michael and Mariam Hawaweeny went to Beirut where the saint was born and baptized with the name Rafla. They returned to Damascus in 1861, and sent their son to elementary school. Although the boy was a good student, his father could not afford for him to continue his studies. Providentially, Deacon Athanasios Atallah (later Metropolitan of Homs) arranged for Rafla’s acceptance as a student of the Patriarchate of Antioch in order to prepare for the holy priesthood.

In 1879, Rafla was tonsured a monk by Patriarch HIEROTHEOS and became his personal attendant. Later, he was sent to the Theological School at Halki, where he was ordained to the diaconate in 1885. Upon graduation, Deacon Raphael returned to his homeland and accompanied the Patriarch of Antioch on his pastoral visitations to various parishes. 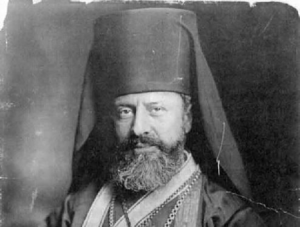 The saint’s thirst for knowledge was so great that he asked the Patriarch to permit him to continue his theological education in Russia, promising to return as the Patriarch’s Russian-language secretary. Deacon Raphael was accepted at the Theological Academy at Kiev, and in 1889 he was appointed as head of the Antiochian representation church (metochion) in Moscow. At the request of the Patriarch of Antioch, he was ordained to the holy priesthood, then raised to the rank of archimandrite.

The Antiochian Patriarchate had been under the rule of foreign bishops since 1766. This was an intolerable situation for Father Raphael, who wrote many articles urging that the administration of the Church of Antioch be returned to its native clergy and people. His outspoken criticisms led Patriarch SPYRIDON to suspend Father Raphael from priestly functions.

Eventually, St. Raphael was persuaded to ask the Patriarch’s forgiveness. The Patriarch reinstated him, but transferred him to the canonical jurisdiction of the Church of Russia. While teaching at Kazan’s Theological Academy, Archimandrite Raphael was invited to come to New York to become the pastor of that city’s Syro-Arab Orthodox community.

St. Raphael arrived in New York on November 2, 1895. One of the first things he did was to establish the church of St. Nicholas in New York. The parish later moved to Brooklyn. In addition to his pastoral duties there, he was given responsibility for all the scattered children of Antioch in North America. He spent the rest of his life traveling across the continent seeking out Orthodox Arabs and gathering them into a harmonious spiritual family in the Church. 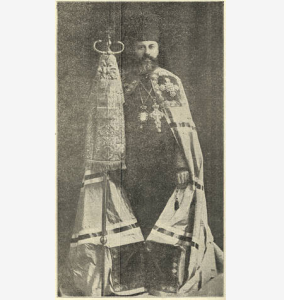 He comforted his people in sorrow and also shared their joys. He baptized their children, blessed their marriages, and buried their dead. He was a beloved spiritual father who organized many parishes and provided priests to serve them. At the time of St. Raphael’s death, the Syro-Arab mission had 30 parishes and 25,000 faithful.

As many people know, St. Raphael was the first Orthodox bishop to be consecrated in North America (1904). He was also a tireless laborer who strove to build up the Church (I Cor. 14:12), and his great love and sacrifice for his flock mark him as a true pastor.

The books and articles he has left behind give us an indication of his personality. He was a man of prayer who was consumed with zeal for the house of the Lord (Psalms 68:9). He protected his flock from false teachings and from straying into other pastures. He bore illness and affliction with patience, ever glorifying the Name of the Lord.

On February 27, 1915, he rested from his labors and fell asleep in the Lord. We honor him as our father, teacher, and heavenly intercessor. By his holy prayers, may we be accounted worthy of the heavenly Kingdom. Amen.

Rejoice, O Father Raphael, Adornment of the Holy Church! Thou art Champion of the true Faith, Seeker of the lost, Consolation of the oppressed, Father to orphans, and Friend of the poor, Peacemaker and Good Shepherd, Joy of all the Orthodox, Son of Antioch, Boast of America: Intercede with Christ God for us and for all who honor thee.

Calendar at a Glance